Bolenz & Schäfer (BSD), which is based in Biedenkopf-Eckelshausen, opened a subsidiary in the Chinese city of Taicang on 25 March 2015. Frank Fuchs, CEO of BSD, commented: “This marks the beginning of a new era in our global activities.” Dr Anne-Kathrin Roth from BSD’s parent company is delighted that Roth Industries, which operates around the world, now has its first production facility in Asia. The two joined staff, customers and representatives of the local authorities in opening the new site in Taicang, near Shanghai. 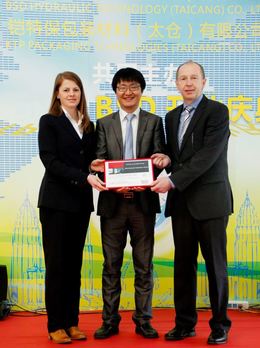 The opening ceremony for BSD Hydraulic Technology Taicang was attended by many invited guests, including the city’s mayor, delegates from the business development organisation, customers and suppliers as well as representatives of other local firms. Dr Anne-Kathrin Roth passed on the congratulations of the owner family. In keeping with tradition, a red ribbon was then cut to mark the formal opening. Equally traditional was the Chinese fireworks display that proved the highlight of the celebrations.

Taicang is an attractive base for Roth Industries subsidiary Bolenz & Schäfer. Home to half a million people, it is just under 50 kilometres northwest of the major city of Shanghai. Among other things, it is well known for its cleanliness, its attractiveness to industry, its green credentials and its popularity with tourists. Situated by the coast, the port city enjoys a strategic location and is also easily reached from Europe. This is one of the reasons why over 250 foreign firms, including many German SMEs, have already set up bases there.

The new Chinese subsidiary will supply BSD hydraulic accumulators promptly and efficiently to its Asian clientele. With its new site, Bolenz & Schäfer hopes to strengthen existing customer relationships and better tap into the growth market of Asia. Hartmut Kämmer, Head of Sales and Marketing, explained: “In future, our own sales team will be able to take on the tasks that until now have only been carried out by our distributors. Competitive disadvantages arising from long transport times, transport costs, customs and time differences will become a thing of the past.”

The new site is to manufacture bladder accumulators and sell them alongside piston and diaphragm accumulators made in Germany. As well as 850 square metres of production space, some 250 square metres are also available for use as meeting, conference and recreation rooms as well as showrooms.

Roth Industries also wants to use the company in Taicang as a contact point for other business fields within the Group. For instance, the business activities for other lines of products can be channelled through the office in China and streamlined.

Bolenz & Schäfer has manufactured hydraulic accumulators for all manner of different applications at its Biedenkopf-Eckelshausen site for over 60 years. BSD has now won customers all around the world with its comprehensive range of products. Frank Fuchs explained the company’s global focus: “Across the globe, we are seeing a trend towards environmentally sustainable processes that preserve resources. Our products are supporting this trend, ensuring that many facilities can operate safely and save energy – from large plant for heavy industry and the energy sector right down to mobile accumulators.”

This was also confirmed in April 2015 at the Hannover Messe trade fair, in which Bolenz & Schäfer regularly participates as part of the special “Drive Technology” exhibition every two years. “Customers are coming in from more and more countries. And we’re proud of the fact that ours include some well-known manufacturers. Many have been relying on our outstanding product quality and our services for decades – and we want to expand this position on the global market”, emphasised Hartmut Kämmer.

The Group is represented globally by 24 production and sales companies, which, like BSD, are run independently and are ideally placed to exploit synergies generated by working together. Roth Industries currently operates primarily in Europe and North America, and now also in China.