The Federal Association of Surface Heating and Surface Cooling (BVF) presented Dautphetal entrepreneur Manfred Roth with their lifetime achievement award for surface heating. The association awarded the prize for the very first time in Fulda on 26 November 2015. 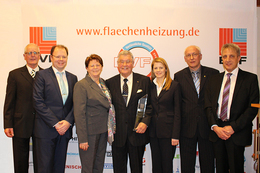 Manfred Roth, holder of the Federal Cross of Merit and Honorary President of the Lahn-Dill Chamber of Industry and Commerce, was presented the award at a ceremonial gathering by the Chairman of the BVF, Ulrich Stahl.
The prize-giving was preceded by an address by Professor Hermann Werner Kurth, Head of the Institute of Methodological Analysis (IMA), who looked back at Manfred Roth’s lifelong endeavours in the field of surface heating. In his speech, he said the following about the Managing Director of Roth Industries: “Manfred Roth has always been a trailblazer in our industry, constantly setting new standards in surface heating.”

In spring 1980, Manfred Roth came up with the idea of using plastic clips with a locking cover to fasten pipes to insulation panels that had been pre-assembled in the factory. He believed that this manner of pipe installation would fare much better on the market than the conventional methods of steel grid and stud fastening. Just a short while later, in autumn 1980, Roth launched its Original Tacker System, a tradesman-friendly assembly method for underfloor heating.

Professor Kurth highlighted Roth’s innovative strength: “Over the years, the Tacker System has proved its worth the world over as the most popular method for installing underfloor heating. The name “Tacker System”, coined by inventor Manfred Roth, has become the generic term for this innovative installation system, which has undergone continual optimisations and developments to all its system components, including the pipe clip.” Professor Kurth went on to say that Manfred Roth had made a significant mark on underfloor heating and can be regarded as a pioneer in this sector.

Manfred Roth thanked the BVF for the award, saying: “It is a great honour for me to be holding the first ever BVF Award in my hands. Our company’s success in the underfloor heating industry is all down to teamwork. For this reason, I would like to dedicate the BVF Award to our staff.”
The prize-winner also praised the work carried out by the association: “The BVF has played a significant part in the success of our industry. We owe them a great debt of gratitude for their beneficial work since 1971. In Germany alone, three out of four houses are now fitted with underfloor heating. When we first began to produce underfloor heating in 1980, its market share was only about three per cent.”