Roth Industries held a farewell ceremony for 13 long-standing employees who are retiring. Directors, HR managers, members of the workers' council and supervisors paid tribute to the staff members and looked back on their careers with the company. 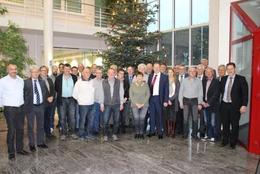 Marika Seifert had put in many years of hard work at Bolenz & Schäfer in Eckelshausen. Lucie Bäcker, Rolf-Emmerich Cegledi, Dieter Eckhardt, Reinhold Franz, Hans-Otto Kombächer and Marold Uhl played a key role in the success of Roth Werke in Buchenau over many years. At Roth Plastics Technology in Wolfgruben, Helmut Aßmann, Maria Hudziak and Heinrich Richard Rybacki gave many years of dedicated service, as did Ferenc Balog and Gunter Großmann at Roth Umwelttechnik in Bischofswerda and Gerhard Finger at Schlesinger Maschinenbau in Burgwald.
Manfred Roth, owner of the family-run company, expressed his pride in and gratitude for their loyalty and the results achieved through a concerted effort. Roth bade farewell to the long-standing employees, wishing them all the very best for their retirement. Head of HR Michael Donges spoke about the staff members’ careers. The event was then rounded off with a communal dinner attended by the directors, the retiring staff members’ former managers and the workers’ councils.