Seven apprentices have successfully completed their training at the Roth Industries Group. At a graduation ceremony on 25 February 2016, Head of HR Michael Donges presented trade proficiency certificates and bonuses of EUR 600 in recognition of their achievements. He congratulated the apprentices at EHA Composite Machinery, Roth Plastics Technology and Roth Werke on their success. 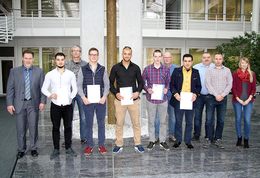 At EHA in Steffenberg, Kevin Bilsing, Hassan El-Issa and Florian Kamm completed their training as industrial mechanics. Meanwhile, Ümit Kesici and Aykut Teber at Roth Plastics Technology in Wolfgruben are now qualified process mechanics, as well as Talip Arikan, who finished his training at Roth Werke in Buchenau. Tim Schneider also qualified as an industrial clerk at the site and was named the best in his year for that profession by the vocational college in Biedenkopf. All of the apprentices were given a job upon completion of their training.

Chair of the Works Council Ralf Freund, Head of HR Michael Donges and youth representative Annika Brasche congratulated the newly qualified specialists. Together, they praised the apprentices’ achievements and the commitment of their supervisors. “The completion of training is the basis of a successful career. We’re very proud that we’ve provided so many young people with a platform for solid professional training and a successful career,” explained Michael Donges. In addition to their bonuses, each former apprentice received a small gift at the ceremony.