Bezirksverein Mittelhessen, part of the VDI or Verein Deutscher Ingenieure (The Association of German Engineers), has awarded the 6th Eberhard-Möllmann prize for outstanding achievement among graduates of technical colleges. 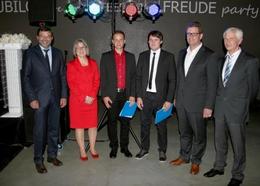 Roth Industries in Dautphetal became patron of the prize as part of the celebrations held by the Berufliche Schulen Biedenkopf at the Aue events hall in Biedenkopf on 30 June 2016. Head of Industrial Technology and Managing Director of Roth’s engineering companies Alfred Kajewski presented the prize together with Johannes Weg, a member of the Executive Board at VDI Bezirksverein Mittelhessen e. V. They paid tribute to the year’s best graduates from the technical college, Alexander Joedt and Kevin Oeljeklaus, who had specialised in mechanical engineering. Both received a certificate and some prize money for their top grades and outstanding achievements.

As Alfred Kajewski explained: “We place a special focus on training and supporting aspiring engineers. I would like to congratulate both of these top students for their excellent achievements and hope that they will gain a foothold in German industry as innovative engineers. Perhaps new career prospects will even open up for them in local companies.” With innovative companies working in business and industrial technology, Roth also relies on qualified new recruits and skilled workers, as Alfred Kajewski also pointed out.

With 22 production and sales companies operating throughout the world, Roth Industries is an international market leader in core segments. Alongside its headquarters in Buchenau, Roth has sites throughout the region in Burgwald, Eckelshausen, Steffenberg and Wolfgruben.

VDI Bezirksverein Mittelhessen awards the Eberhard-Möllmann prize every year to the best school leavers or college graduates coming through the technical stream. The prize aims to promote aspiring engineers from handpicked vocational grammar schools and technical colleges in the region surrounding VDI Bezirksverein Mittelhessen. It is designed to be a special incentive for pupils and students.

The VDI in Germany
Around 155,000 engineers belong to Europe’s biggest technical and scientific association – the Verein Deutscher Ingenieure e. V. (The Association of German Engineers, VDI). VDI sees itself as an advocate of engineering and technology at a national and international level. It is a charitable organisation independent of any economic or party-political interests. The engineering association was founded in 1856. Bezirksverein Mittelhessen has around 1,600 VDI members.

Eberhard Möllmann
Engineer Eberhard Möllmannwas born in 1931 and was Chairman of VDI Bezirksverein Mittelhessen from 1980 to 1992. He worked for many years as the technical director at Buderus in Wetzlar. Möllmann made a significant contribution to technology transfer after German reunification and was respected throughout Europe. This was clear not least from his many years serving as president of the German Institute for Standardization (DIN) and as the first German president of the International Organization for Standardization ISO. His abiding passion was to support aspiring engineers and encourage young people to study engineering. He supported the association right up until his death in 2012.