2016 marks the 25th anniversary of Bischofswerda-based Roth Umwelttechnik. The manufacturer used the occasion of a celebration held for current and retired staff and their families to open a new blow-moulding line. 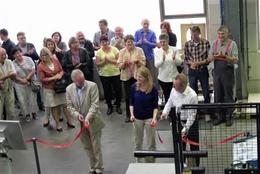 The new system can be used to make small moulded plastic parts such as containers for transporting hazardous materials, which Roth markets under the name of “Servicebox”, and to manufacture parts for portable toilets. The family-owned company is investing over a million euros in its eastern German site in order to meet growing demand for high-tech plastic parts. A robot makes working on the new blow-moulding line easier for the operator. The handling device moves the plastic parts to the desired position at the touch of a button. The production process helps to preserve resources as its cutting-edge control and drive technology means that it uses 50 per cent less energy than comparable older systems. Roth's company philosophy is firmly based upon the greatest possible conservation of resources, protection of the environment and use of renewable energy.
As well as high-tech parts, Bischofswerda-based Roth Umwelttechnik provides complete system solutions for recycling rainwater, either in the form of underground storage tanks or for installation in houses or gardens. The company also supplies environmentally friendly small sewage plants, infiltration systems, collecting pits and wastewater tanks.

A strong bond with the locals and the region
Guests at the anniversary celebrations included the Roth family, who own the company, as well as Roth Industries Director Matthias Donges and Roth Werke Director Franz Kind. Managing Director Manfred Roth congratulated staff at the Bischofswerda plant on the company’s 25th anniversary and underlined: “We’re proud that our Environmental Technology division is doing so well and that we’re opening a new blow-moulding line for plastics so that we can meet the growing demand for high-tech parts. The site is crucial for our plastic products, which go to customers all round the world. Immediately after German reunification, I felt it important to shoulder some of the responsibility for rebuilding the economy in the former East. We enjoyed all the highs and stuck it out through all the lows and I feel a strong bond with the locals and the region.”

Roth thus has five production sites located throughout the world that use blow-moulding processes to create plastic products. In addition to the two German manufacturing facilities in Dautphetal-Buchenau and Bischofswerda, there is a further one in the Spanish town of Tulda and two more in the USA, in Watertown and Syracuse. The manufacturer has the largest blow-moulding plants in the world, which it uses to make containers that can hold up to 10,000 litres. With its storage systems for water and fuels, the family-owned company is one of the global market leaders and is now strengthening this position by further developing its production sites. The ground-breaking ceremony for expanding blow-moulding production in Watertown was held very recently.

After the speeches, the official opening of the new machinery and a site tour, the social part of the event then got under way. The anniversary celebrations were rounded off by a performance of Tanztheater (“dance theatre”), a concert by a shawm band, a film screening and a communal dinner.

Roth Umwelttechnik grew out of the injection-moulding line in a combine harvester factory
The modern Roth Umwelttechnik owes its origins in part to the injection-moulding department of the former company Sächsische Mähdrescher AG in Neukirch. When the company ceased production in 1991, Roth took over its injection-moulding operations from the agency set up to privatise state-owned East German enterprises. It also acquired the workforce plus much of the premises of the combine harvester factory in Bischofswerda.
Roth launched a major investment project, building halls and setting up a blow-moulding line with two large blow-moulding machines. The company initially focused on making polyethylene tanks for heating oil. On 15 April 1992, Roth produced its first heating oil tank on eastern German soil.
Even though heating oil tank production continued to boom right up until the end of the 1990s, the manufacturer also began blow-moulding water and sewage containers as early as 1994, drawing on the experience gained in container production up to that point. The rotational method was then added as a means of manufacturing containers that can hold up to 6,000 litres. Roth ventured into a new area of business in 2002, using its blow-moulding machinery to manufacture high-tech plastic parts such as components for road markers, which are produced using a double mould. High-tech parts are now one of the main pillars of Roth’s eastern German site. Since 2006, Bischofswerda has been home to one of the world’s largest blow-moulding plants, which the company uses to manufacture the Roth Twinbloc container, which is designed for underground use and which can hold up to 5,000 litres.

Manfred Roth was awarded the Cross of the Order of Merit of the Federal Republic of Germany (“Verdienstkreuz am Bande”) by the then Minister-President of Hesse Roland Koch in 2007 to honour his long-standing voluntary and social commitment. He had been put forward by, among others, the former Mayor of Bischofswerda Andreas Erler and was presented with the award not least in recognition of his achievements in helping to develop the economy in the former East Germany.
However, the Roth family has not just supported economic development in the region, but also donated a floor heating system worth some EUR 50,000 for the rebuilding of the Frauenkirche in Dresden in 1994.