K participants interested in U.S.A. as an industrial centre - Roth involved in a series of talks

The U.S. Consulate General hosted a forum about the U.S.A. as an industrial centre as part of K 2016, the world’s number one trade fair for plastics and rubber. The event generated a great deal of interest among visiting professionals. 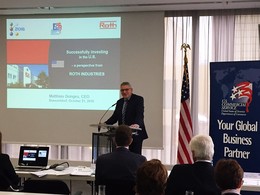 Industry representatives from plastics processing, plastics finishing and mechanical engineering for the plastics industry visited the event. Operating under the title “Investment & Business Development Success in the U.S.A.”, there were several talks, including by U.S. commercial consul Michael Walsh and Vice President of the SPI (the Plastics Industry Trade Association) Michael Taylor. Director and CEO of Roth Industries Matthias Donges spoke about Roth’s business activities in American industry. The manufacturer is a classic example of the success of SMEs in the U.S.A. Roth has been working there since 1997 and now has two production sites in New York State. Roth USA has around 50 employees.

In Watertown, the specialist in plastics processing uses blow moulding processes to manufacture double-walled tanks for both private and commercial use as well as traffic guidance systems made of plastic. Roth also manufactures heating circuit distributors and components for floor heating and cooling systems there. 100 kilometres away, in Syracuse, Roth USA uses blow moulding processes to produce both tanks for water and sewage treatment technology and kayaks. The company supplies the North American and Canadian markets from both sites. Roth Hydraulics NA has also been headquartered in Syracuse since January 2016. This company represents the hydraulics sector of Roth Industries. It manufactures bladder accumulators and markets piston and diaphragm accumulators produced in Germany.