In the run up to Christmas, Buchenau-based company Roth Industries was happy to make a wish come true for the local Evangelical kindergarten. The kindergarten needed to get their hands on some computers so it could create personal souvenir documents for its children, as child carer Tanja Willershäuser explained. 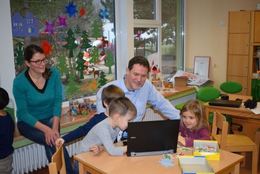 On reaching the end of their time in the kindergarten, each of the children receives a personal folder containing texts and photos as a souvenir of their time there. That’s why Willershäuser was delighted to receive delivery of a number of donated laptops, which were put to work immediately on arrival. Roth HR manager Michael Donges dropped into the kindergarten to practice using the computers with the children. He commented that, “Children grow up these days with digital media all around them – learning how to use a computer through play helps them to understand such technology. We have been supporting efforts to promote such an understanding since 2012 as the patron of Buchenau's kindergarten, working within the 'Haus der kleinen Forscher' (Little Scientists’ House) project.

The non-profit foundation 'Haus der kleinen Forscher' is committed to a nationwide initiative in Germany to educate children at preschool and primary-school age in science, mathematics and technology. Through the training and assistance it provides, the foundation helps teachers to guide little girls and boys on their journey of discovery through everyday life. The foundation is funded by the Federal Ministry of Education and Research.

About 29,700 pre-schools, childcare centres and primary schools already reached
The 'Haus der kleinen Forscher' Foundation has been committed to improving child education since 2006. On the occasion of the tenth anniversary of the Foundation last September, the Minister for Education Johanna Wanka expressed herself impressed with their success. “Over the past few years, the 'Haus der kleinen Forscher' Foundation has grown to become the largest initiative in early education in Germany. Thanks to the intense commitment of its 225 network partners, the Foundation has managed to reach out to about 29,700 pre-school facilities, childcare centres and primary schools. Their combined efforts have enabled about 1.9 million young people to benefit from the 'Haus der kleinen Forscher' initiative.” In almost every corner of Germany specialists and education professionals in pre-school facilities, childcare centres and elementary schools have been contacted by one of their local network partners.