The Oskar Patzelt Foundation honoured Dautphetal-based family Company Roth Industries with two awards. In September, the company received the Großer Preis des Mittelstandes. In addition, the foundation surprised the management on 19 October 2019 with an honorary plaque recognising four outstanding companies in Germany. The awards were each presented as part of a gala event in Würzburg. 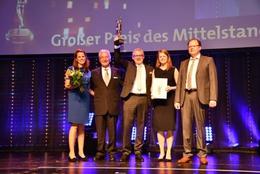 The Board of the Oskar Patzelt Foundation, Dr Helfried Schmidt and Petra Tröger, presented the Großer Preis des Mittelstandes award statuette. In their laudatory speech, they praised the overall performance of the Roth company and particularly underscored its support of employees, capacity for innovation, environmental management and social commitment. The jury was impressed by the Roth family company’s development from a handicraft business into a worldwide leader for floor heating and cooling systems, energy storage systems and composite technologies. For this reason, they also presented the Roth family company with the 2019 Honorary Plaque.
In the presence of countless invited guests, several hundred entrepreneurs attended the award ceremony for the 25th “Großer Preis des Mittelstandes 2019” competition as well as the gala event where the special awards were presented. Across the country, a total of 5,399 (2018: 4,913) medium-sized companies, banks and communities were nominated for the 2019 competition. 758 of them made it to the “jury list”.

Competition motto: Sustainable Business
The Roth family of companies and Matthias Donges, CEO of Roth Industries, accepted the award.
Matthias Donges stated: “We are delighted to win an award that is also known as the Oscars of the German mid-sized sector. This award is a recognition of all that we are doing in the building and industrial technology sectors. The motto of this year’s competition was ‘Sustainable business’. This underscores our commitment as a medium-sized family company based on our company principles: close-knit, dynamic, responsible. We are dedicating these awards to our employees, on whom the success of our company depends.”
With various companies and around 1,300 staff,
Roth Industries operates in the international energy systems, sanitary systems, environmental systems, plastics technology, hydraulics and composite technologies segments.
The originator of the Großer Preis des Mittelstandes, the Oskar Patzelt Foundation, called for nominations of outstanding mid-sized companies for the competition. Companies cannot apply to participate in the competition themselves. Instead, they are proposed by firms and institutions that know the company in question. Twelve regional juries and a final jury select the prizewinners. Made up of representatives from business and education, the jury focused both on the companies as a whole and on their complex role in society. As part of its assessment, the jury was looking for factors like creating jobs and training placements, evidence of innovation and modernisation, engagement with the local region and service and customer focus.

Germany’s most coveted business award
No other business competition in Germany has been received with such acclaim or maintained such momentum over a quarter century as the award sponsored by the Leipzig-based Oskar Patzelt Foundation. No prize money is awarded. The companies are solely interested in the recognition and affirmation of their achievements without financial incentives.
“The Großer Preis des Mittelstandes awarded by the Oskar Patzelt Foundation is Germany’s most coveted business award,” as newspaper Die Welt would have it. The Foundation was accorded the Order of Merit of the Federal Republic of Germany in 2008 and 2016 and the Company Change Award in 2015.