Manfred Roth celebrated his 60th anniversary as an entrepreneur in 2021. Eberhard Flammer, President of the Chamber of Industry and Commerce (IHK) Lahn-Dill, and IHK Chief Executive Burghard Loewe congratulated on this extraordinary event and presented a certificate of honour "for 60 years of successful and exemplary entrepreneurship" in the Manfred Roth Atrium in Dautphetal-Buchenau. 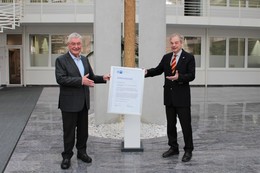 At a meeting with the entrepreneurial family and Matthias Donges, CEO (Chief Executive Officer) of Roth Industries, Eberhard Flammer paid tribute to the life's work of the jubilarian. He stated: "Manfred Roth has developed the family business, founded in 1947, from very small beginnings into a company with global standing. He has created jobs and secured prosperity for our region. The Chamber of Industry and Commerce thanks him for his commitment, also as long-time President of the Chamber, to assume social responsibility for the region and beyond."
Matthias Donges opened the meeting with a review of Manfred Roth's life. He particularly emphasised his social and economic commitment to the Marburg-Biedenkopf region. He said that Manfred Roth was still committed to this task, also as Honorary President of the Chamber of Industry and Commerce.
At the end of last year, Matthias Donges and Ralf Freund, chairman of the works council, had already paid tribute to Manfred Roth on behalf of the staff for his commitment to the family business. The entrepreneur's family also took part in this meeting.

From a craft business to an internationally active company
In 60 years, Manfred Roth developed the business of his father Heinrich Roth into an internationally active company. Under the motto 'one brand - many strengths', the family business is now represented worldwide with various companies, around 1400 employees and 28 production and sales companies. With a number of different divisions, Roth Industries is one of the most innovative companies in building and industrial technology.
Manfred Roth resigned from the management of Roth Industries, headquartered in Dautphetal-Buchenau, at the beginning of 2019 and transferred responsibility to his three children, who have already been active in the management for many years. In the family business, Manfred Roth continues to be available to everyone with advice and support.

Early corporate responsibility
At the age of 21, Manfred Roth joined the business of his father Heinrich Roth in 1961 when he became seriously ill and took over entrepreneurial responsibility. The first product range was boiler stoves with handicraft production in Silberg and Mornshausen. When he started working in his father's company, Manfred Roth was already convinced that the monostructure had to be overcome in order to secure the company's long-term future. He had the idea of developing the family business, founded in 1947, into a dynamic industrial enterprise with several technology and market-leading business fields. For him, it was clear that a well-balanced diversified company would offer greater resistance to crises and opportunities for growth.
When Manfred Roth joined the family business, he had to interrupt his studies in mechanical engineering at the Rheinisch-Westfälische Technische Hochschule (RWTH) in Aachen. This ensured the continuation of the business. Nevertheless, he did not give up his plan to study. When his father's health improved, he decided to study economics at the Philipps University in Marburg in 1963 and was thus close to his company to fulfil his entrepreneurial duties. In 1967, he graduated with a degree in economics.

Responsible for environment, economy and society
Manfred Roth is committed to the economy, society and the environment. In 2007, Manfred Roth received the Cross of Merit on Ribbon of the Federal Republic of Germany awarded by the Federal President for his multiple voluntary and social commitments. Roth supports social organisations, cultural projects, regional club life, projects related to education and training and is strongly committed to business cooperation with schools, colleges and universities. Since his studies, Manfred Roth has felt particularly connected to the Philipps University in Marburg.
Environmental protection and resource conservation have a high priority in the company's orientation and are therefore also part of the corporate principles as well as the newly developed Code of Conduct. Roth pursues an ambitious climate protection programme and developed its own environmental management system. Since 2010, the company has been certified according to EMAS (Eco-Management and Audit Scheme) and regularly publishes an environmental statement. The manufacturer works in a climate-neutral manner at specific locations. Its commitment has won many awards: It received the national "EMAS Environmental Management 2018" award from the German Federal Ministry for the Environment for its environmentally friendly production at the Buchenau and Wolfgruben sites. At the beginning of 2022, the European Environmental Bureau in Brussels recognised the sustainability of the product range for the second time, and at the end of 2021, the news magazine FOCUS published Roth in the special "FOR OUR PLANET" as one of 130 German companies with "Top Climate Commitment".

Value-based into the future
The Roth family business is family-oriented, responsible and dynamic. These values motivate Manfred Roth's children Claus-Hinrich Roth, Christin Roth-Jäger and Dr Anne-Kathrin Roth, who have been Managing Directors of Roth Industries since 2017. Together with CEO (Chief Executive Officer) Matthias Donges and CAO (Chief Administrative Officer) Marcus Schmidt, they are responsible for the further development of the value-based and future-oriented family business. With its cross-divisional areas of expertise in energy, water and plastics, Roth Industries has a high level of performance. Diversification enables the use of synergies and the expansion of innovation leadership. Roth received confirmation as the world market leader in the segments of energy storage systems, surface heating and cooling systems and composite technologies through its entry in the Langenscheidt "Lexicon of German World Market Leaders". 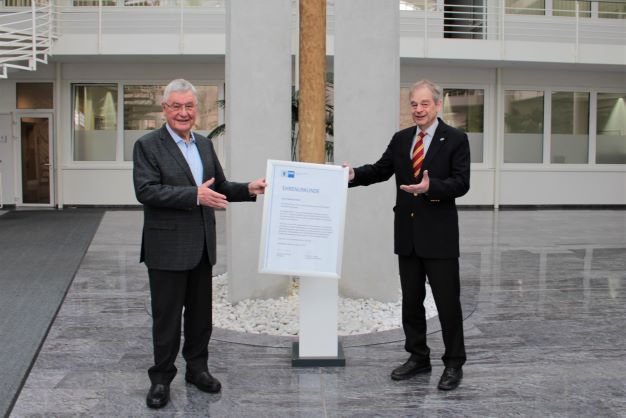