At its headquarters in Dautphetal-Buchenau, the Roth family-owned company celebrated its 75th anniversary. The employees and their families were invited. More than 600 guests came to the anniversary celebration – for them there was a colorful program and several surprises. Including a book presentation and a musical journey through time. 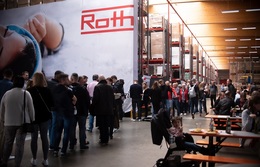 In their speech, the managing partners and the third generation of the company Claus-Hinrich Roth, Christin Roth-Jäger and Dr. Anne-Kathrin Roth looked back on the 75-year history of the company and evaluated the current situation: "Today on our anniversary day, we can really look forward to it together! Our family business is in a good economic position. We have mastered the challenges we have repeatedly faced in our 75 years of corporate development."

In 2021, the company achieved consolidated group sales of 340 million euros with 1,400 employees worldwide. They thanked the employees for their great commitment and also their families, without whom this great commitment would not have been possible. Despite the current challenging times, the third generation is optimistic: "As a family business, we have managed solidly and thus created a good foundation."

With its product ranges, Roth is well positioned to meet the future challenges of the energy and climate crisis and offers a solution to current energy issues with an overall system consisting of a heat pump, suitable heat storage and surface heating. With increasingly hot and drier summers, Roth surface cooling and Roth rainwater tanks are becoming increasingly important. Roth supplies machines for the hydrogen technology of the future and offers filter systems for increasing hygiene challenges.

Following the welcome, Manfred Roth surprised the employees and invited friends with a gift. He had taken the 75th anniversary as an opportunity to write another book. Already on the occasion of the 70th anniversary, Manfred Roth had published the book "From craft business to world market leader – A life for the family business". The book now published is entitled "From worker in the quarry to entrepreneur. Heinrich Roth paves the way for us." Manfred Roth describes the eventful life of his father, who laid the foundation for the successful family business. In it, he explains how Heinrich Roth paved the way for the emergence and development of Roth Industries. The book contains impressive eyewitness accounts of the economic, social and political conditions at that time. Many photos and illustrations bring the font to life. Winfried Damm, Director of Studies and former headmaster of the Städtische Gymnasium Bad Laasphe, wrote the introduction of the new script. In it, he affirms: "Your father's entrepreneurial achievements are highly appreciated. In particular, his foresight and willingness to take risks contributed to the fact that decisive steps were taken in his homeland for the economic future in the first post-war years. The handover of his company to you and the support of your groundbreaking and future-oriented restructuring and further development of the company are also proof of his entrepreneurial wisdom and life experience.“

Manfred Roth expressed his great joy that his children have been committed to the family business for many years and continue to run it in the third generation. Afterwards, the Chairman of the Works Council, Ralf Freund, spoke greetings on the occasion of the anniversary.


Musical journey through time with the Roth Band and other attractions

Another surprise came from the ranks of the employees. With a live performance, the Roth Band took the guests on a musical journey through the decades of the company's history, i.e. since the company was founded in 1947. Just as Roth employees act creatively alongside the corporate vision "The Roth World composes technologies for solutions full of energy", so there was further creative potential within the workforce. Musical talents from Roth companies in Germany have come together and put together a unique set of pieces of music for the anniversary. They rehearsed for the live performance, recorded the songs in a studio and created a CD that musically captures the beauty of the day and will remind those present of the Roth Family Festival. The music project was coordinated by the CEO (Chief Executive Officer) of Roth Industries, Matthias Donges and Michael Pohl, Sales Manager Sanitary Systems at Roth.

There were also culinary treats and a colorful program led by the hr manager Michael Donges. In addition to a performance by the Kunstturnvereinigung Obere Lahn, there were other attractions such as the admiration of a police classic car, a nostalgic chain carousel, a bouncy castle, a make-up and craft corner as well as a photo box. Interested visitors were able to take part in a company tour.