Roth France is celebrating 40 years of business this year. It was the first Roth foreign subsidiary set up by family-owned company Roth Industries based in Dautphetal. Its founding marked the beginning of Roth’s global expansion. The manufacturer of innovative building and industrial technology products currently operates worldwide with 25 production and sales companies. 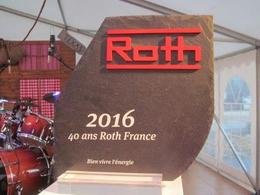 Roth France invited guests to its site in Lagny-sur-Marne, near Paris, on the occasion of its anniversary. Among them were members of the Roth family, current and retired employees and business partners. Managing Director Manfred Roth congratulated directors Claude Brand and Thierry Photinodellis and the entire workforce on behalf of the Roth family, saying, “The management in France has provided a real boost to the company in an increasingly difficult environment, helping to reinforce our market positions. With over 80 employees, Roth France has proven to be a thriving, innovative and dynamic company that continually sets new market trends as a leading supplier in its industry. My thanks go to the entire workforce for their loyalty, their wealth of ideas and their commitment.” Manfred Roth finds it comforting to know that Roth France feels part of the family-owned company, adding that he hopes the friendship between Germany and France will remain strong.

New warehouse section inaugurated
Roth France used the anniversary festivities as an opportunity to celebrate the official opening of its new 500-square-metre warehouse section for underfloor heating components. The modern warehouse enables fast and efficient deliveries and better service. The celebrations had a cowboy theme and offered a varied programme.
“We’re not just celebrating our anniversary but also the high quality of our products and our innovative ideas, of which we’re very proud,” stresses Director of Roth France Claude Brand. “Just recently we were awarded an innovation prize for Roth’s ‘Panel 16 Direct’ floor heating and cooling system by the French association ‘Synamome’, which represents builders and architects.”